the story of carlos

Once upon a time there was a lonely little donkey, living alone in a fenced area of building ruins surrounded by discarded waste. Whilst he had no friends, he could hear other animals locked into small spaces a short distance away. The only thing he had to look forward to was receiving food from his owner once in a while. 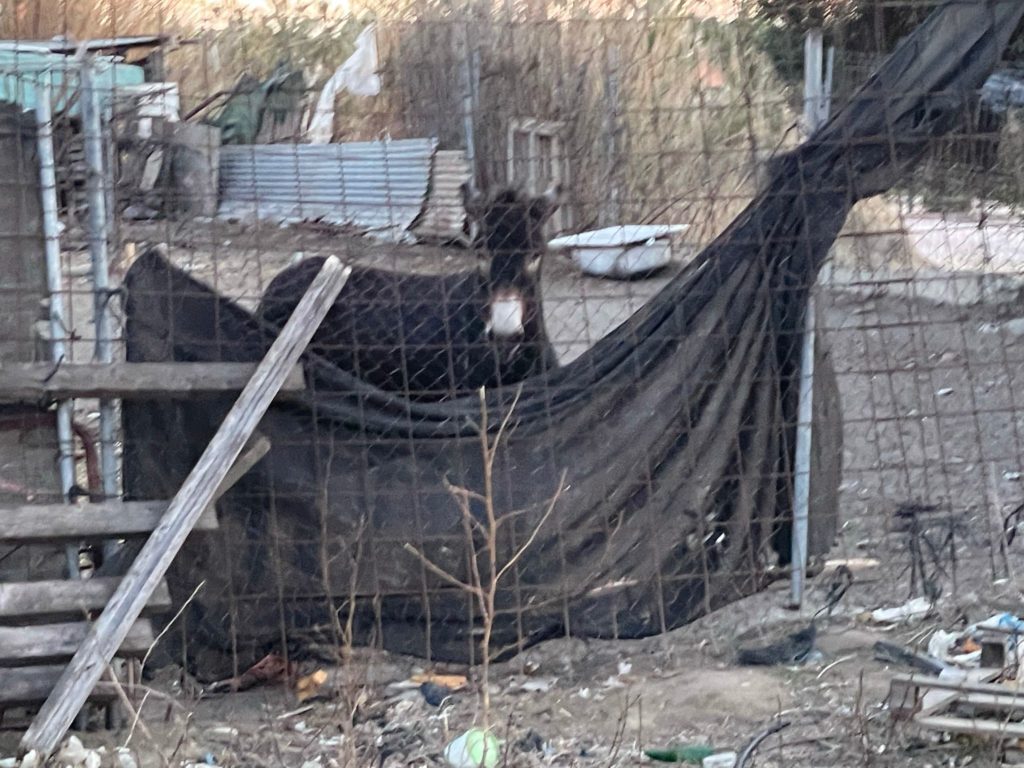 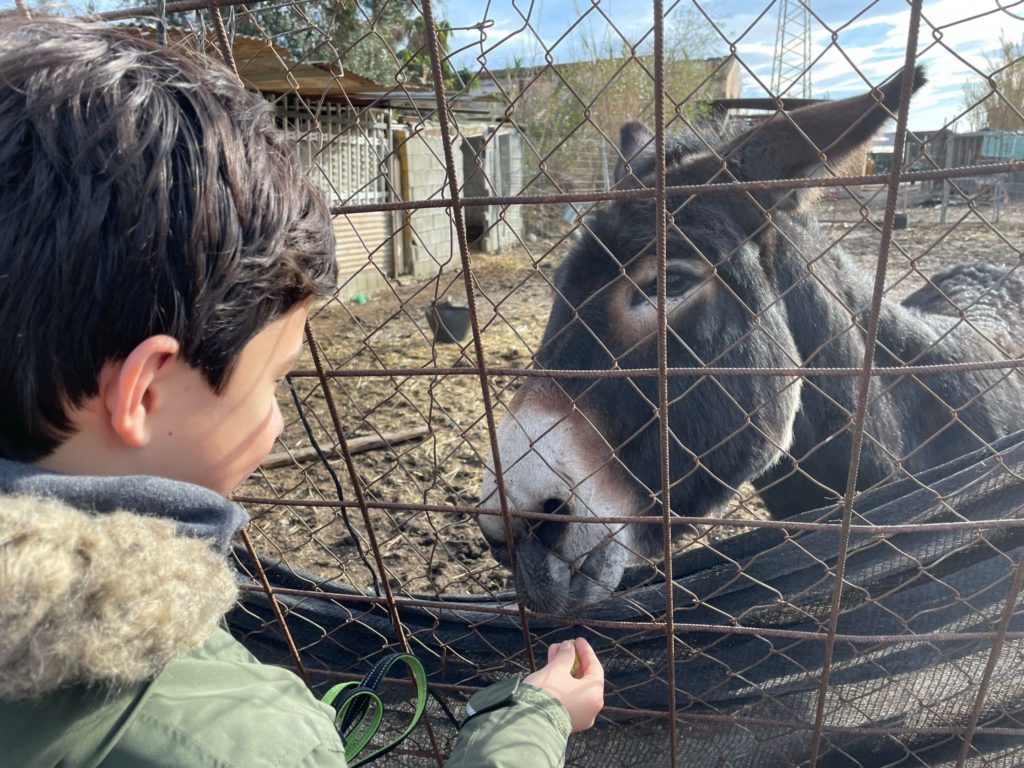 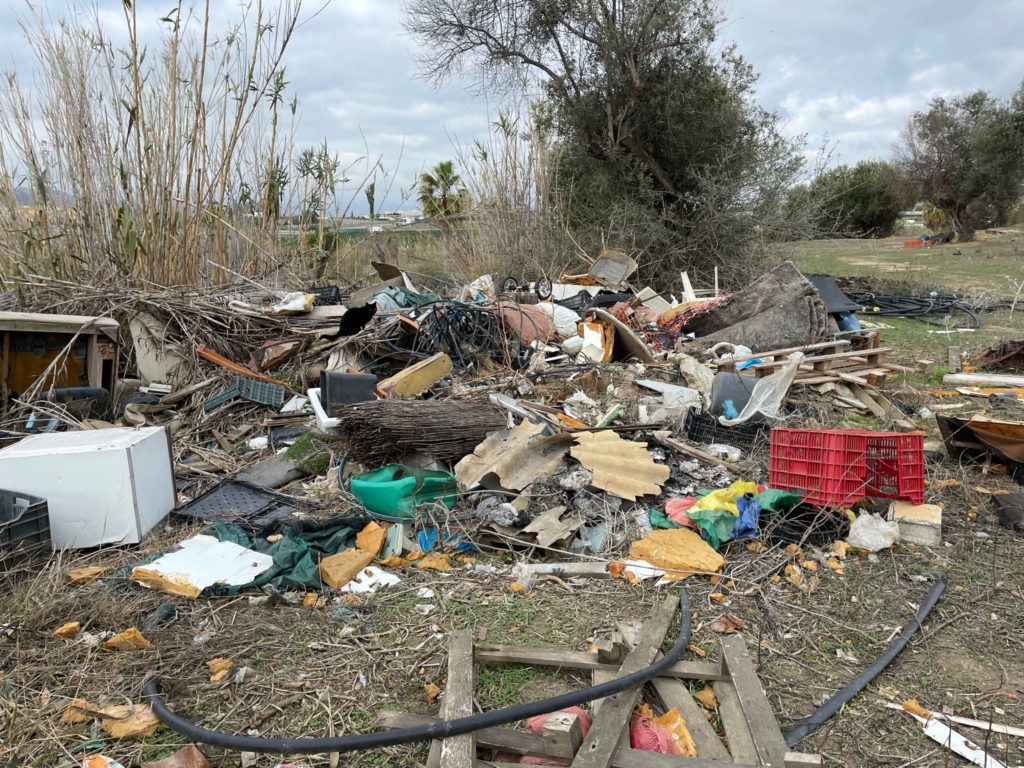 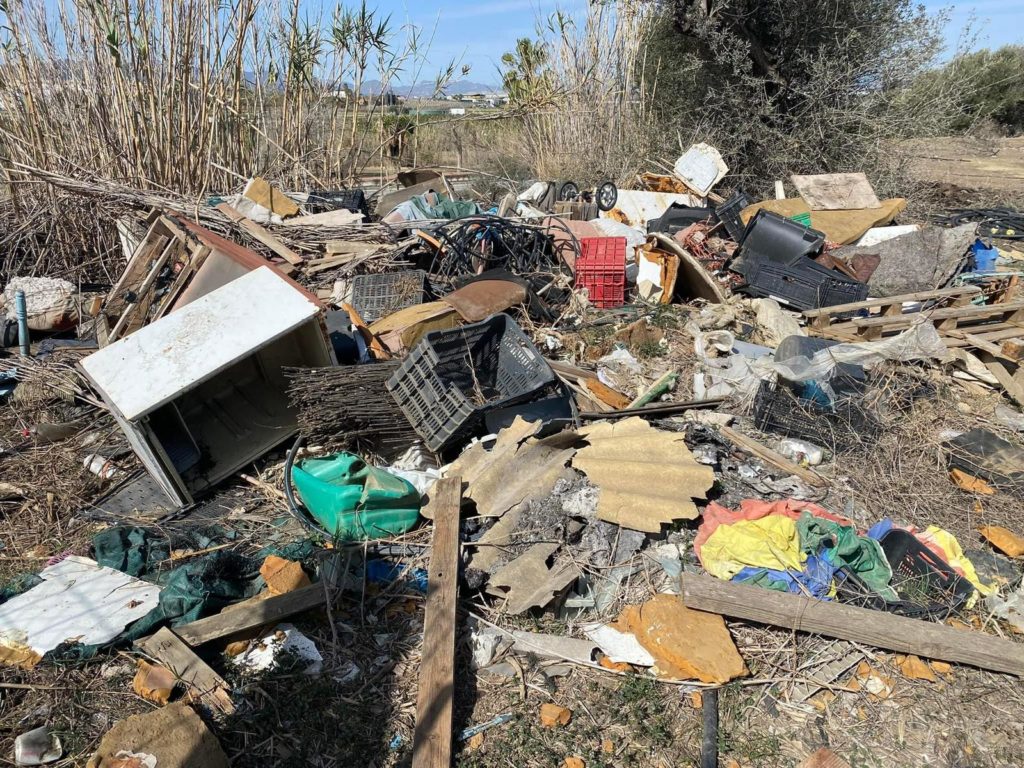 Help Carlos and Donkey Dreamland with a small monthly donation

But one day his life changed. Marianna and her dog Elly came to Spain from Germany and during a walk, they discovered the little donkey behind the ruins. They moved closer to see him and it was love at first sight…!

From that day on, Marianna and Elly visited the donkey twice a day everyday and affectionately named him Carlos, inspired by listening to Carlos Santana. She brought him carrots, lettuce and other exciting, nutritional foods he’d not tried before.

Each time he saw his new friends, Carlos began to sing with happiness in his own donkey language! And so they became best friends.

One day, during stormy weather, the fence around the area was damaged by the wind. Carlos was suddenly able to leave his prison and he seized the opportunity. It so happened that Marianna and her sons came to visit him right at that very moment. When they saw him outside the fenced area, they were so happy to see him excitedly munching the green grass, but he stopped as soon as he saw them and ran to greet them with joy in his eyes!

For the first time in his life, the little donkey knew freedom. He wanted to follow his best friends everywhere, but the roads were dangerous, and so Marianna and her sons did what they could to keep him in a safe spot. At that moment the owners of the donkey arrived and were nervous about how to bring him back into the fenced area. Marianna had an idea… She took her dog’s leash and put it around the donkeys neck, so they could lead the little donkey back to safety.

Marianna felt conflicted: happy to know the donkey was safe, but sad that he‘d be isolated again. She also saw that he was fearful of his owners and that they were angry with him for escaping.

On the way back, Marianna whispered a promise to the little donkey: “you will have your freedom again, let’s have patience”

It wasn’t as easy as she’d hoped. Each day she tried to talk to the owners and others that might be able to help about how she could free the donkey. Without permissions and the right ownership papers, it would be nearly impossible. She contacted several rescue organisations too, but without papers, no-one could organise transport.

Days and weeks past, still with no solution. One day she realised the donkey and other animals were very hungry, and hadn’t received food for some time. She immediately went to buy food and water for all the animals and returned. But as it was evening and the area was unlit, she didn’t want to go alone. She asked a man in the street if he would accompany her and he kindly obliged. As they approached the animals, they became surrounded by a group of angry men, who told her not to feed them. Marianna, with help from her new friend, tried to assure the men that she only wanted to help. But the men remained indignant, and from then on they followed and watched Marianna wherever she went. They made it clear that she was not welcome, near the animals or even in the town…

But what these men did not realise, is that Marianna doesn’t give up easily, and is committed to ensuring the safety and wellbeing of all animals. She continued visiting the donkey secretly, and did her best to wear down the men’s resolve! Against the advice of others, she decided not to involve Seprona or the police. She visited the OCA – the agrarian county office – but, again, without the códico de explotación (a special permission) it was not possible for them to help.

Soon, Marianna would have to return to Germany. She was determined to rescue her donkey friend before leaving but time was running out… She contacted a donkey rescue organisation ‘Donkey Dreamland’ where she received some advice and a promise from Amaya, the founder, that she would take Carlos if Marianna could buy him somehow.

Two volunteers from Donkey Dreamland offered to visit Carlos and Marianna. Their names are Mary and Wietze, and they really helped to offer much needed support at that time. Marianna felt strengthened by this and that’s when she managed to persuade the owner to sell Carlos to her. Things were moving! She got a code from a horse stable, organised vet visits, Carlos was chipped and the legal papers were issued.

Just three days later, Amaya and her team arrived with the transporter that would bring Carlos out of his crumbling prison and into a new life of freedom, friends and happiness. In order for him to socialise with other donkies, Carlos had castration surgery. His hooves were polished by a farrier so that he could walk without pain. Even the farrier praised Carlos for what a brave donkey he had been.

Marianna had done it! It was a beautiful moment of success for all involved. She visited Carlos at Donkey Dreamland several times before travelling back to Germany. She witnessed the wonderful care that Carlos now receives from the kind volunteers at Donkey Dreamland. He gets hay three times a day and a special donkey food with delicious herbs. His coat is brushed regularly. And he enjoys regular walks with the many volunteers that have fallen in love with him just as Marianna did. It was not just a dream anymore, but this is now reality for Carlos, and it’s for the rest of his life.

Carlos is particularly fond of another recently rescued donkey called Olivia. She too had a sad background before being rescued and currently needs a special leg surgery.

Donkey Dreamland is charitable organisation – they rely totally on donations with no help from government or local authorities. As they care for so many deserving animals, the costs are high and so Marianna is making a special request for donors who can bring financial help to support the incredible work they do at Donkey Dreamland. One-off donations or monthly support, whatever your budget, every cent counts!

carlos is rescued and arrives at donkey dreamland